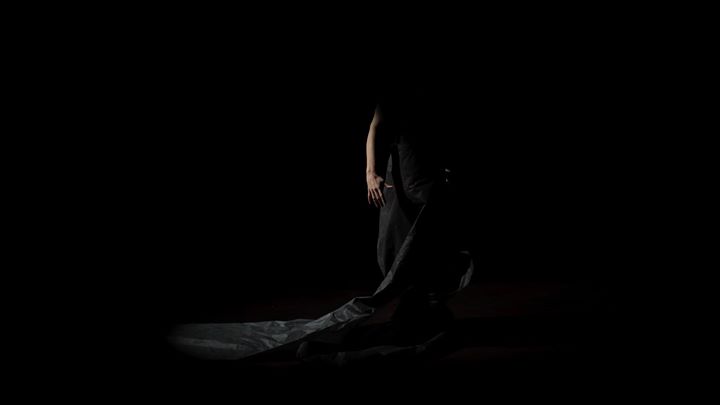 Being ushered by torchlight in small groups into a pitch black theatre is usually only the experience of those annoying theatre latecomers stumbling in the dark to find their allocated seats which seem to always be in the middle of the row. However, in this case being guided in the dark to your seat was not the walk of shame for the tardy, but the beginning of an adventure into an exploration of the visual and audible senses heightened by the depth of darkness.

Each seat was adorned with a synthetic luminous crystal stuck onto a black business-sized card with a cryptic message in morse code on the back (.._.  ._ .  .  ._  _._ _.__ _. ._ _ .._ ._. . , for those who find codes irresistible.) It was a gift for each audience member from the independent visual and performance artist Julie Vulcan. The luminous rock also served as a tiny glowing beacon, highlighting each audience member in an otherwise void of darkness. We were already thrilled with such a cool gift and childishly amused ourselves by placing the crystals on the more obvious parts of our otherwise invisible bodies as we waited for the remaining invisible audience to be seated.

The music and sounds were composed by Ashley Scott, a musician and media artist. Occasional musical swells and silent pauses heightened the visual and audible senses, whilst the imagination attempted to interpret an unfolding story. Sultry alien tones with a staccato of morse code, interspersed with sounds from nature and the city created a unique palate for the imagination and a perfect accompaniment to the visual performance.

Julie Vulcan has toured nationally and internationally, most recently presenting “I Stand In” this year at MAI in Montreal, Canada. She describes the “DARKlight_I:utterings” performance as “a rich sensorium of darkness… the liminal space between light and dark where the shift between cone and rod cells of the eyes is explored.”

Throughout the performance portals of light opened up revealing sinister alien shadows and strange otherworldly creatures interspersed with an audible code of some unknown language. Near the beginning of the show, just as the audience were becoming accustomed to the inky blackness and feeling less nervous of what may ensue, a disembodied woman’s head appeared directly in front of the seats, with a quirky but expressionless face, which at first appeared to be a puppet, until the eyes glanced backwards and forwards startling the audience into submission.

Penetrating dark shadows and under-lit hooded forms direct from nightmares, drifted within the darkness throughout the hour-long performance causing a disturbing sense of unease and a distortion in spatial perception.

The appearance of a tiny green light on the horizon was another memorable scene which gradually highlighted the shadow of an alien humanoid swelling disturbingly until reaching the front row of seats. Whilst the audience strained to see the form casting the shadow in the green light, a second identical alien shadow seemed to miraculously step out from the first, as if the result of a mitotic cellular division.

Unfortunately, true darkness is an experience few of us ever now truly experience whilst living in urban civilisations. This unique performance of DARKlight_I:utterings is the opportunity to facilitate a confronting exploration of the irrational human psyche when exposed to the dark, creating an emotional dichotomy between the fear of an unseen threat enveloped in the true comforting beauty of darkness.