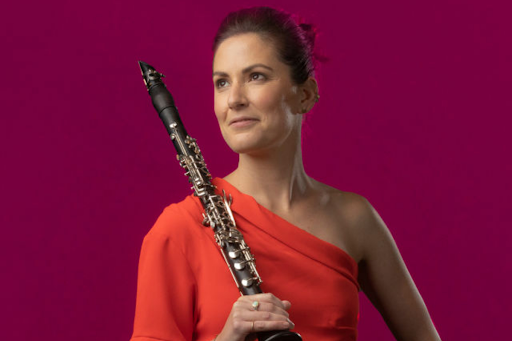 MOZART Concerto in A major for Clarinet & Orchestra

‘Bro’hannes Fritzsch and the QSO boldly went where no orchestra had been before!

The QSO’s Mozart’s Clarinet concert was opened by the sardonic cellist Matthew Kinmont, describing the violins as a ‘flock of somethings’ when they play The Saqqara Bird before they launched into the enchanting piece. The music flutters and soars like the enigma of the small wooden bird discovered in Saqqara in 1898. The small relic could be a toy, a weathervane, ceremonial or more intriguingly, be evidence of the Egyptians having scientific knowledge of aviation. Experiments have demonstrated that the small wooden model mimics aerodynamics and could have flown with the addition of the missing tail fin.

Erit Silver’s fingers flew over the keys as her creamy sounding clarinet soared into the stratosphere before tiny strings evolved into an Indiana Jones-styled melody. With echoes of Psycho and a spice of the Middle East, the violins intently sawed away at their strings. A piquant mournful piccolo from Kate Lawson and throbbing violins drew the resonant clarinet to a sublime prolonged note ebbing to silence.

The Melbourne-based Australian composer Melody Eötvös is not one to shy away from unusual orchestral topics, as the QSO premiered her bolshy antiphonal Hidden Wiring on consciousness in 2020. We can claim Eötvös as an honorary Queenslander as she sculpted her unusual compositional creativity at the Queensland Conservatorium before completing a Masters at the UK’s Royal Academy and a doctorate in the US before returning to lecture at the Melbourne Conservatorium.

Erit ‘Quick’ Silver returned to the stage in a glittering gold sequinned jacket to enthral the audience with her rendition of Mozart’s Clarinet Concerto. It was technically perfect and is a staple for any accomplished clarinettist. Silver gave a soft and tender rendition of the usually more bolshy sound. However, her quiet execution seemed to lose some of Mozart’s intended expression which is not even the original version which was composed for the basset clarinet, to mimic the human voice and was transposed to suit the B Flat clarinet.  This rare instrument was played by his friend, Anton Stadler and composed as a showcase for his outstanding musical dexterity. I've had the pleasure of hearing the basset played in a Chamber music setting which has a very different tone to the clarinet.

The QSO boldly went where they have not been before, with the second half dedicated to Martinu’s Symphony No.1, their inaugural Martinu Symphony performance. Commissioned by Koussevitzky in 1942 in memory of his late wife, it was to be Martinu's opportunity to break into the American orchestral scene, with great success. The eclectic symphony is a cacophonous pick and mix of classical compositions ranging from the Can-Can theme to Psycho and big band jazz, perhaps Martinu’s desperate attempt to appeal to all tastes.

Conductor ‘Bro’hannes Fritzsch named by his Conservatorium students, waggled and weaved as the four movements unfurled. The dissonant first movement, Moderato was unnerving, with a swirling orchestra and screaming strings. Martinu’s use of the Shepherd tone, where overlapping notes an octave apart create the illusion of continual rising and falling, sounded like backmasking, playing backwards with subliminal hidden messages amongst the dissonant tones! The Largo was dark and demonic, with the double basses dragging behind like a dead body. The dynamics danced dramatically with the woodwind trilling up the scales behind a throbbing piano and monotonous drums. The final movement revealed a triumphant resolution to the orchestral turbulence with the major scale shining heroically.

It was an exciting symphony condensing every human emotion and most musical tricks and styles, no wonder the QSO had not embarked upon a whole symphony before. But wow, was it worth it! Both The Saqqara Bird and Martinu’s Symphony No.1 eclipsed Mozart’s title bill, illustrating that 20th and 21st-century compositions continue to innovating orchestral music. The QSO were the perfect orchestra to deliver such a crazy musical feast to exhilarate and stimulate!