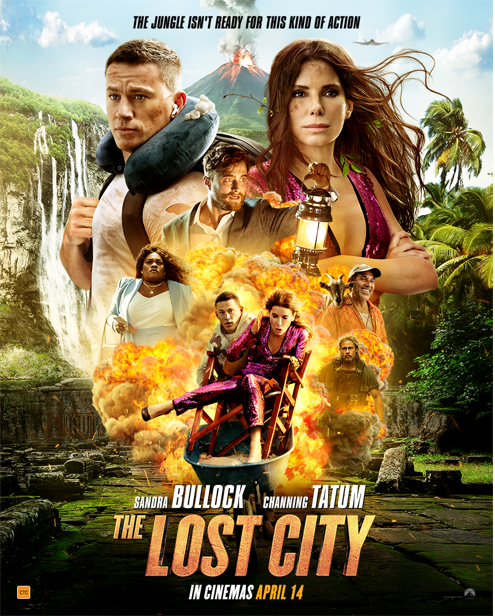 This year we got Uncharted, presented by Sony Pictures, and keeping in theme with the jungle adventure we got The Lost City right alongside it. The Lost City was a lot of fun, taking the necessary time for character development with a decent amount of payoff. Channing Tatum plays his usual charming self as cover model ‘Alan’ while Sandra Bullock plays straight man ‘Loretta’. The audience even gets a hilarious supporting cast that makes this film an absolute blast.

‘Loretta’ is starting to lose interest in the glitz and the glamour of her career, with her cover model being the main attraction, but before she knows it the tables are turned and she is captured by Daniel Radcliffe, who plays millionaire ‘Abigail Fairfax’ to take part in a jungle expedition of a lifetime. Radcliffe does a superb job of playing a greedy millionaire who so happens to believe a romance novelist, whose deceased husband was an archaeologist, is the key to finding ancient treasures buried in the jungle.

It is important to note that although there is a slow build up, the time taken for character development and planting seeds for key story elements pays off in a number of ways toward the end of the film. The audience slowly but surely starts to break through the exterior shell of both ‘Alan’ and ‘Loretta’ as they are forced to work together to escape the jungle just like in her romance novels. The film leaves you with a bittersweet feeling in the pit of your stomach knowing this will be Bullock's last film for a while. Bullock is planning on looking after her kids now and taking a break from the film world. Tatum is charming as ever playing the pretty boy and does well to break through Bullock's exterior.

There is so much comedic potential when you throw Tatum in the mix and he does well to compliment Bullock's cold exterior with a light hearted energy. The film has quite a few clever quips and does well to entertain while learning more about the characters on a deeper level. The Lost City has adventure, a bit of romance and a sprinkle of silliness thrown in for fun. What is not to love about a Tatum/Bullock combination? Take your bestie to see this movie ASAP because you are not going to want to miss it.