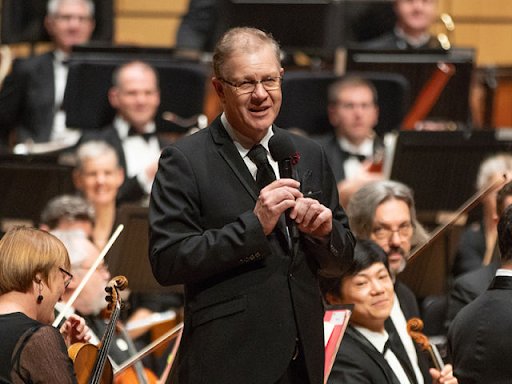 BEETHOVEN Romance No.2 in F for Violin and Orchestra, Op.50

MAHLER Blumine Movement, from Symphony No.1

The QSO and two Guy’s closed the 2022 Music on Sundays series with a bang, despite the rain!

There had been rumours that the Music on Sundays host, Guy Noble was a rain God or perhaps cursed, as each time he is to perform with the QSO there is torrential rain. Recent regional tours with the QSO and Noble had led to cancellations due to the rain. Noble was getting a bit twitchy for this concert, with Brisbane suffering from more floods caused by the ongoing downpour. Noble apologised for the “shit weather” at the beginning of the concert, exclaiming that he will be pursued by Oxfam to visit the drought-stricken areas of Africa!

Fortunately, most of the audience managed to weather the storm and turn up for another brilliant Music on Sundays with the final concert for 2022. A special performance has been arranged for the QSO 2023 season with Guy Noble’s Great Tunes in September, where he chooses the music and gets to conduct to celebrate hosting Music on Sundays for eighteen years!

Those who attended last week’s QSO Beethoven and Dvorak concert had been flawed by the mastery of the Israeli conductor and soloist Guy Braunstein. Luckily, he had stayed to perform in this concert despite missing his children. He admitted that whilst here, he “had been crying into his pillow,” which won the hearts of all.

Braunstein again demonstrated his unique talents for multitasking by conducting and playing solo violin opening with Beethoven’s Romance No.2 in F for Violin and Orchestra. He skilfully conducted by waving his bow as a baton whilst clutching his rare 1679 Roggieri violin in his left hand. He followed up last week’s sublime rendition of Beethoven’s Concerto in D for violin and orchestra with another incredible performance of the supremely serene Romance No.2. The delicate tone of his violin was like the scent of vanilla wafting eddies of pleasure across the audience.

Braunstein’s versatility was further demonstrated by his arrangement of Fritz Kreisler’s 1926 Syncopation which bounced along bursting with Copelandesque Americana. The foxtrot styled composition had humorous hints of a Viennese waltz ending with a cheeky squeak from Braunstein’s violin.

After a chummy high five between the two Guy’s and concertmaster Warwick Adeney fortuitously turning Guy’s music upright on the stand, the brass launched into Suppé’s Overture to the Light Cavalry with a fabulous fanfare to knock your socks off. The whirling violins and crashing drums held their own against the formidable brass who were flawless in their rendition of the famous operetta.

It was all love and flowers with Mahler’s Blumine Movement from Symphony No.1. The soft violins waltzed around with the brass until all stilled to a luscious silence. Margaret Sutherland’s Viennese-styled Allegro con brio of her Concerto for Strings still retained the flavour of Australia, and the QSO created an amazing stereo effect with the music zoning in and out across the concert hall, as if you were wearing headphones.

The brooding melancholic Allegro moderato of Schubert’s Unfinished Symphony in B demonstrated contrasts as different as night and day, alternating between joyous passion and frenzied turmoil in his Epic piece. The six double basses set a dark mood with their almost imperceptibly low notes.

The popular Emperor Waltzes closed the concert after Braunstein had cheekily offered the baton to Guy Noble to conduct. Strauss Jr., the waltz King had the audience bobbing in their seat, imagining the dancers whirling and strutting like peacocks in the King’s court. A fantastic fanfare finale from the brass closed to whoops and thunderous applause after another incredible QSO concert celebrating 75 years of performances! Sadly, Queensland now says adieu to the multitalented maestro Braunstein, who returns to his family overseas.

The concert was recorded for replay on ABC Classic on 8 November at 1pm AEST.