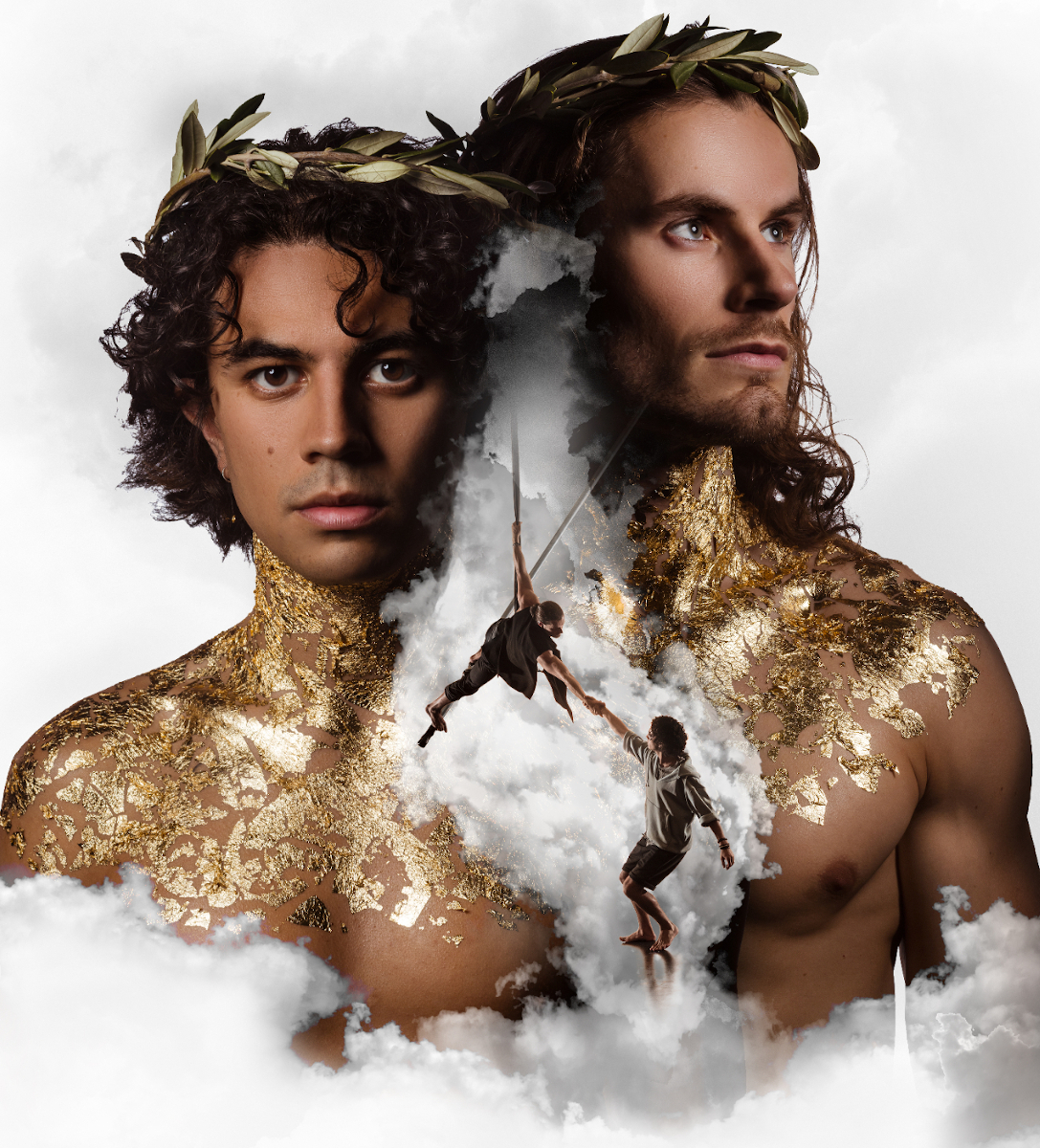 - David Morton’s Holding Achilles reworks Homer’s Iliad, seeking a softer, more human trail through the ancient epic. It teases out the homoerotic subtexts, making explicit the love of the hero Achilles and his more thoughtful companion, Patroclus. It finds a gentler side to the warlike champion of the Achaeans and focuses less on pride and the glory of war, themes that course through the hot-blooded veins and arteries of the original. Other touchstones remain, like meditations on fate and the fleeting nature of existence, rubbing shoulders here with more modern concerns. Pressing into the frey you’ll meet humanism, personal agency and the morality of armed conflict all vying for attention. Of course the dramatists could never do away with two of the most venerable players here; the pair at the center of it all are tragedy and love. Reaching from classical antiquity to the present, their arms embrace us and then tear us apart again and you don’t have to be Euripedes to know that they are universal. Holding on to what you most desire is a hard thing to do.

Holding Achilles is a very modern production, right from the Matrix-esque slomo of the action sequence that kicks things off, to the gender-swapped ancient Greeks like Ajax and Agamemnon or the simultaneously ghostly and thunderous electronica performed live on stage by Montaigne. Actually, sometimes it’s not quite so modern. The dialogues are regularly split by her musical action sequences, which, if this were a movie, would be montages -of training, combat or muscular romance- where the players, in various stages of undress, go whirling in aerial dance around the raked stage like it was a velodrome, usually hefting spears or staves as they fly in and out of sweaty embrace. Much of the first act is about training for war, so the comparisons to Top Gun become a bit inescapable. Which, honestly, is irreverent and delightful and, don’t worry, this is much smarter than that.

Funny story: the choreography is pretty impressive and sometimes quite ambitious, if not dangerous. Nonetheless I found myself, spoiled by the movies, wishing the spear thrusts and blows could connect just a bit more kinetically. Then, because one of the players had injured themselves too badly to go on, we were all sent home at interval and I had to come back another day to see the rest; be careful what you wish for!

The action takes place under the mighty disc of the beating sun or ghostly moon, depending on which lights the ominous prop is bathed in and it aids the impression that this human story is set against the backdrop of a monolithic and unforgiving world. The staging is cleverly minimal and those spears and staves I mentioned stand in for much of the scenery, like buildings and forests. Side note: there’s a pretty winning, abstractly puppetted bear, too, which will, trust me, gambol merrily all over your emotions.

What of the story? The first act of the play depicts the meeting of the young and diffident Patroclus, played by Karl Richmond doing his best Timothy Chalamet moodiness while sporting a light kiwi accent. He’s exiled from his homeland and forced to eke out an existence in the kingdom of the Myrmidons. It is there he meets the young and powerful Achilles, played with convincingly chiseled abs, by Stephen Madsen. He’s gripped by the traumatic loss of his mother, Thetis and visits that pain on all about, particularly the shy and sensitive Patroclus. That of course, doesn’t last. As Achilles introduces Patroclus to the physical prowess of the Myrmidons, Patroclus in turn teaches him to be a better, more thoughtful human being. Inevitably, they grow together and, finally, fall into each other’s arms. I really enjoyed this half of the play, maybe even more the second time I saw it. I found the romance vibrant and engaging, written with wit, humor and humanity. It’s about as ‘classic’ as a John Hughes script and my friend who came with me thought it was a bit cheesy, but I -and the literal busload of highschool fangirls in the audience- had a great time.

The second act is, as you might have guessed, a very different beast. Everyone involved does their darndest to shove the thirteen-or-so hours of the Iliad into one hour on stage. After all the learning-to-be-better-people that Achilles and Patroclus did in the first act, this whole war thing is a bit on the nose, for them. Patroclus sighs and longs for an olive grove to retire to while Achilles is not much of an action hero at all as he gets pushed around by the bellicose Agamemnon and brutal Menelaus at every war council he’s forced to attend. The players are hard-pressed, pursuing their rather modern preoccupations with the morality of war and a desire to save lives, through the ancient action blockbuster that is the Iliad. More than that, it’s just really difficult to do the Iliad in an hour. Characters -Briseis, Hector, Priam, Chryses and more- appear in such profusion that there’s little time to flesh them out and endow them with the same humanity we discovered in the previous act.

Patroclus and Achilles try to outsmart their vicious allies as much as their enemies, bending over, ever further backwards, to be true to themselves and achieve multiple, well-nigh impossible tasks. They’re honouring their political promises to the Achaean aggressors at the same time as minimising the ever-growing number of casualties, on both sides, while trying to maintain their humanity and love for each other, even as they daily throw themselves into the ever more lethal slaughter. Honestly, it’s a lot and in more ways than one, it can’t end well. I felt both the Iliad and the very human tale of love that is Holding Achilles up to this point suffered as the action leapt from plot point to plot point. The same can be said of trying to paint over the ancient drama with very modern sensibilities, without seeming ludicrous.

You know what, though? My friend loved it. She thought the reworking of the Iliad into an antiwar parable was both timely and cleverly achieved, a thoroughly relevant reevaluation in today’s strife-riven world. Is it possible to buy into both halves of this story? Maybe. I’m pretty sure some of those fangirls I mentioned were quietly sobbing as the play drew to its inevitable, bloody conclusion. A good half of the audience were on their feet, too, applauding, shortly thereafter.

This play wrests away a lot of the power you would once have found in the hands of the gods and bequeaths it to human characters, who, unsurprisingly, are just as unqualified to hold it as those immortal trouble-makers ever were. Their lives are as full of rage, sorrow and failure as they are love, laughter and idealism. Their best intentions are ripped from their control, bent into tragedy, and finally, left in the dust. I think director David Morton would like you to believe that the spectral traces of our heroes can rest with a measure of peace: their love lives on, in our hearts at least. The hideousness of human brutality cannot overwhelm its greatness.

In my opinion, I share every sentiment that’s on offer here,  but I’m not sure that Holding Achilles' touching romance can truly make its case, in the shadow of this vast, hoary and blood-drenched epic. Then again, what love story has ever emerged unscathed, when it had the misfortune to blossom in the heat of humanity’s ceaseless desire for war? I long for a world where love is truly, convincingly victorious.