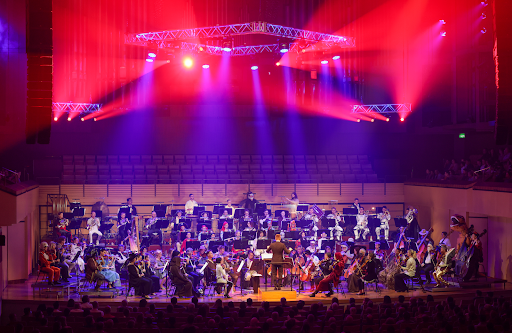 A terrific testament to the titan of film scores with a double bass playing Tyrannosaurus rex!

The Queensland Symphony Orchestra, celebrating their 75th year, treated a full house to a magnificent musical journey of movie music by John Williams to celebrate his 90th birthday year. With 52 Oscar nominations and 5 Oscars, 25 Grammys, 4 Golden Globes, 7 BAFTA’s and more than twenty Gold and Platinum records amongst his multitude of accolades, John Williams is a film-score titan and one of the most award-nominated individuals in history, second only to Walt Disney.

The 90-year-old is the eminent master iconic musical connotations. If you hear mention of a shark attack in the news, the ominous Jaws Theme instantly comes to mind. Or perhaps on hearing the first mystical chimes of Hedwig’s Theme you are instantly transported to a world of magic, wizards and witches, not to mention the thrill of terror with Darth Vader’s Imperial March. Despite Williams having planned to retire in the 1990s, he is promising two more scores, both for Spielberg for the fifth Indiana Jones film and Spielberg’s semi-autobiographical film, The Fabelmans.

The movie madness started in the foyer with E.T. in his bicycle carrier, the cast from Jurassic Park, Indiana Jones brandishing his whip, Peter Pan with Tinkerbell and Imperial Stormtroopers for photo opportunities. The costumes continued in the concert hall when Siths, pirates, wizards and witches, viola playing sharks (one in gold lamé trousers!) and a multitude of stormtroopers brandishing brass instruments took to the stage. A bare-chested Dr Ian Malcolm from Jurassic Park aka Justin Bullock opened the concert by trying to chat to a 7-foot tall Tyrannosaurus rex, moonlighting as another double bass player. Unfortunately, he couldn’t hear much in the towering suit and with such short arms we all wondered how he would manage to play such a large instrument!

The motley crew had the audience spellbound with nineteen of John William’s film themes, plus a bonus encore of three Star Wars pieces to reward a standing ovation at the end. The affable Conductor Nicholas Buc enthralled the audience between each set with his in-depth knowledge of John Williams’ music, relating to how he had met Williams at the Hollywood Bowl in 2018. Each musical morsel was also accompanied by a coloured laser light display complementing the mood of individual themes.

The brass overture had a flying start with the theme of Superman swooping into the QPAC, accompanied by red and blue lasers scanning the concert hall as the music which soared across the audience. The classic overture influenced by the music of Holst and Elgar was followed by the emotive love theme including six key changes!

The powerful impression movie music can have on the psyche had us cowering in our seats with the terrifying 1975 Jaws Theme which famously caused many viewers to shun the beaches or ever ‘dare to go back into the water!’. The notes swelled like the sea bringing waves of terror across the audience until culminating in a plastic shark diving for Buc and a blood-curdling scream from the entire orchestra!

Next was the gung-ho march of Steven Spielberg’s 1941, and though the music did not save the movie from being his worst flop, the military tattoo theme of William’s is instantly recognisable and considered synonymous with the US military of World War II.

The five-note motif of Close Encounters of the Third Kind with aleatoric melodies and harmonies and the uplifting flying theme of E.T. evoked an urge to have an encounter with one of the cuter forms of extraterrestrial life.

The lilting sea shanty of The Flight to Neverland from Hook opened the second half, followed by the wonderment of Jurassic Park and a poignant solo from Malcolm Stewart on the French horn. Williams scored the award-winning music for the film in only a month and described wanting to create a soundtrack with "pieces that would convey a sense of 'awe' and fascination and overwhelming happiness and excitement" of witnessing extinct dinosaurs from 65 million years ago. Throughout the concert was the bizarre sight of a T. rex playing the double bass, most surprising was how well he also kept time nodding with the beat. His small arms did not seem to hinder his playing, although turning the score pages proved to be a little too much!

Sayuri’s Theme from Memoirs of a Geisha featured the cello and flute emulating traditional Japanese instruments. Magic was on the agenda next with Hedwig's Flight from Harry Potter and the Philosopher's Stone Children's Suite for Orchestra. All were enraptured by the magical iconic theme with the celeste, xylophone, bells and glockenspiel creating an enchanting and spellbinding atmosphere.

The audience were also treated to some of Williams’ lesser-known film themes with Viktor’s Tale from The Terminal, the emotive Schindler’s List, Angela's Ashes, J.F.K. and the rarely performed Parade of the Slave Children from Indiana Jones and the Temple of Doom. Conductor Buc stunned the audience with the tit-bit that the music was so rarely performed that they had acquired a copy of Williams’ hand-written score!

Williams’ second-most famous theme from the franchise is the superb Raiders March from Raiders of the Lost Ark, which had everyone bouncing in their seats and wishing they owned a whip.

The pinnacle of the evening, in a night full of highlights, was the Star Wars Suite. Star Wars: A New Hope is synonymous with science fiction movies and the soundtrack elevated Star Wars from a cheesy low budget movie, to one of the best Sci-Fi movies of the 20th century. Williams was commissioned after being recommended by Steven Spielberg for his famous score for Jaws.

The bold and brassy soundtrack with echoes of Holst’s Planets Suite and the use of distinctive leitmotifs was inspired by the film King’s Row (1942), scored by Erich Wolfgang Korngold. The Empire Strikes Back is considered the best movie score, winning a BAFTA for Best Movie Soundtrack and an Academy Award for Best Sound Mixing, and listed as the number one best film score by the American Film Institute plus an Academy Award® for Best Original Score.

Princess Leia's Theme from the Star Wars Suite had flute, clarinet and horn solos to stir the cauldron of desire. The following Asteroid Field is another rarely performed movement, possibly due to the dexterity needed by the musicians.

When the iconic theme of Star Wars finally blasted out there was a big cheer from the audience. The brass and percussion sections were awesome and appeared to be thoroughly enjoying hogging the limelight. With a rapturous standing ovation, Buc returned with a red lightsaber to conduct a further three Star Wars movements to an ecstatic audience. He swooped the weapon across the heads of the violins almost taking out Princess Leia, concertmaster Natsuko Yoshimoto. The woodwinds of the iconic Cantina Band Theme closed a concert of epic proportions to whistles, cheers and foot stamping.

It was a fun-filled magical musical movie-themed odyssey which as a devotee to the music of John Williams, fully lived up to the magnificence of the movie-score titan who has entranced the world with his emotive themes. Buc and the QSO were so good that the audience would have been happy to cancel all plans and instead hear the other 100 or so John Williams movie scores. A terrific testament to the titan of film scores. Here’s to another 90 years for both Williams and the QSO!