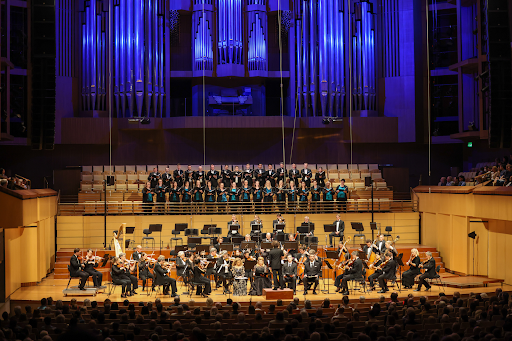 DEBUSSY Prelude to the "Afternoon of a Faun"

A Dramatic Degustation To Delight The Soul!

An excited audience awaited the first QSO concert with a full choir for two and half years since the COVID-19 pandemic. Mozart’s Requiem with the Brisbane Chamber Choir was the perfect inaugural concert to celebrate the lightening of restrictions which have strangled the Arts across the world.

Before the Requiem, the audience was treated to Stravinsky’s Symphonies of Wind Instruments and Debussy’s Prelude to the "Afternoon of a Faun,” both highlighting the talents of the QSO’s woodwind and brass musicians.

Stravinsky described his Symphonies of Wind Instruments as an austere ritual of unfolding little prayers between instruments. He recrafted his original innovative 1920 version in 1947, to be more palatable to the audience. However, the QSO presented the 1920 original in its full glory with ‘No strings allowed” as a discordant dissonance between woodwind and brass. The unique piece was dedicated to the memory of Stravinsky’s idol, Claude Debussy with the brass lamenting his passing with a fascinating ritualised chant between the tuba and trombone. The flute and clarinet rolled and bubbled amongst one another in a cauldron of cacophony.

Debussy’s sublime tone poem based on Stéphane Mallarmé’s poetry in a Prelude to the "Afternoon of a Faun" is evidence of why Stravinsky idolised the composer and his works. The delicious flute solo of Pan played by Alison Mitchell cast a spell on the diaphanous nymphs and the audience as it floated over the magical forest with the chromatic scale. Debussy’s use of a tritone interval often referred to as the Devil’s interval perhaps signified the danger of Pan’s alluring pipe! The opulent flute with clarinet, bassoon and harp entranced the audience with the tonal spell to create a sublime soundscape of an ethereal forest.

The 32-strong Brisbane Chamber Choir and Australian soprano Sara Macliver introduced Mozart’s 14 movement mass with the strident Requiem aeternum. Macliver has a unique crystal shattering voice evidenced by her many awards, an honorary doctorate from the University of Western Australia and over 35 CDs with ABC Classics.

The mysterious saga surrounding the real composer of the Requiem started with an anonymous commission, now assumed to be Count Franz von Walsegg who first took credit for the uncompleted work. Mozart was heard to be rhythmically mouthing the Timpani rhythms on his deathbed! It has had a list of composers adding to the piece: Joseph Eybler failed to finish it, and Franz Süssmayr, a former student added to it and forged Mozart’s signature. In the 1990's the Requiem was completed by the American musicologist Robert Levin using his extensive knowledge of 18th-century works.

The mass was sung in the original Latin with handy program notes of the English translation. The choir were strident in their voices in Dies Irae with the dramatic and diabolic timpani and Rex tremendae where you can almost hear the last fading heartbeats of Mozart through the drumming.

The four soloists were wonderful in Tuba mirum with the robust Bass, Pelham Andrews mimicking the tuba before passing the solo torch to tenor Andrew Goodwin, the versatile mezzo Fiona Campbell, ending with soprano Macliver. In Lacrimosa (weeping) the choir mimicked floods of tears in an aural wailing wave as the orchestra plodded behind. The dominant Domine Jesu had the choir and soloists defiant in their call sounding like each was accusing the other “you did it!”

International conductor Jonathan Stockhammer, famed for his enjoyment of both operatic and modern works, reminded me of Professor Flitwick from Harry Potter during Hostias. His diminutive figure bobbed and weaved on the podium in an effervescent manner as the choir and orchestra marched on.

The wonderful finale was Lux aeterna, with a strident tumbling choir and strong orchestra. Unfortunately, as the last few bars faded to oblivion the concert hall was wrought with the hideous sound of the mobile phone repeatedly screaming out for an answer. Groans of dismay and every eye from the audience, and performers on stage located and pierced the perpetrator with the sword of Damocles. The twit who had refused to switch off their offensive technology despite the warnings slunk in their seat, knowing they should be hung at dawn!

The QSO’s presentation of the Mozart’s Requiem concert celebrated the versatility of woodwind, brass and the human voice in a dramatic degustation to delight the soul.