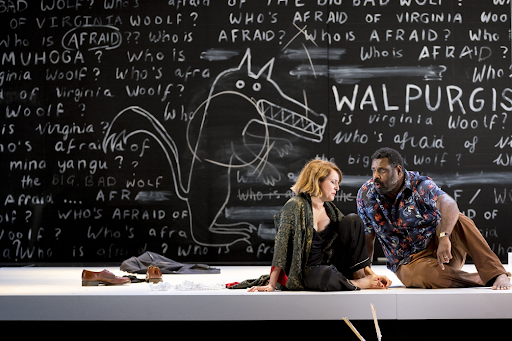 Illusions and Allusions to Who’s afraid of the truth?

The feminist icon Virginia Woolf once said, “Growing up is losing some illusions, to acquire others.” In a celebration of 60 years since Edward Albee shocked audiences with his Broadway unnerving show Who’s Afraid of Virginia Woolf? It oozes between vitriol and love in a torturous marriage and has been served with an Australian racial twist by First Nations Director Margaret Harvey in her debut with Queensland Theatre and the State Theatre Company of South Australia.

The original dialogue as an allegory of the turmoil in 60’s America has been preserved, due to Edward Albee’s estate copyright still being current. However, Harvey has moved the setting to Australia and introduced a racial dimension through casting whilst using Australian accents to add another dimension of socio-political tension.

The setting is one tumultuous evening of drunkenness between two academic couples back at the house of the middle-aged pair, in an after-party after a rather staid evening of introductions at the University for the new younger Biology professor, Nick.

George, the seemingly affable older History Professor is adroitly played by Jimi Bani (Othello, Our Town), an Indigenous actor from the Torres Strait Islands. Congolese-born Rashidi Edward plays Nick convincingly as the Biology professor debuting for Queensland Theatre along with Juanita Navas-Nguyen who was less convincing as Nick’s wife, Honey. All three actors are not the usually cast white Americans hoping to bring racial stereotypes to the fore. Susan Prior debuts brilliantly as the irascible drunken Martha whose father is the cruel Chancellor and founder of the University ruling with an iron fist.

Be warned, this is a heavy, emotive and verbose play that runs for over three hours with intense scenes which may trigger some people. If you are feeling over-stressed or anxious, this may not be the play for you as on the packed opening night, there were noticeably empty seats after the second interval. The evening unfolds in three Acts with two intervals: Fun and Games; Walpurgisnacht; and The Exorcism, as the accusations and secrets flow with the alcohol.

Virginia Woolf left a suicide note to her husband which read, “Dearest, I feel certain that I am going mad again…So I am doing what seems the best thing to do.” Albee’s title is a play on the childish song “Who’s afraid of the big bad wolf?” and alludes to the difficulty we can all have in differentiating between illusion and reality, especially in times of stress. Woolf also used stream of consciousness as a literary device demonstrating that the insignificant may have a far-reaching underlying significance. This has been used to full effect by both the author Edward Albee and Director Margaret Harvey.

Set and Costume designer Ailsa Paterson (The 39 Steps) cleverly further accentuated the suggestion of illusion with Perspex screens and a moat of water isolating the two couples from reality. The backdrop of blackboards littered with graffitied phrases relating to the play and the three Acts is insightful. The ingenious gradual emptying of the set and removal of the perspex walls signifies the removal of social niceties to leave only the confronting sculptural centrepiece speaks volumes.

There was little use of special lighting other than to reflect the ripples on the moat and also a poor use of sound or music other than a drum beat and the dance music, which could have helped to make the play seem more dynamic and less dependent on the dialogue.

I have seen better interpretations of Who’s Afraid of Virginia Woolf? The divisive casting sometimes contradicted the dialogue when the actors described one another as blue-eyed or slim-hipped. Perhaps, that should have been considered when trying to overlay the racial element of social commentary which had not originally existed. Despite the discombobulation, the two main characters Jimi Bani and Susan Prior were excellent and I especially enjoyed the scenes when the two were sparring with conviction.

Because of Australia’s dubious and checkered history, Harvey has attempted to highlight allusions to false identity by using the play as a vehicle to identify “Who’s afraid of the truth?” Perhaps, it should have been left to illusions rather than allusions.