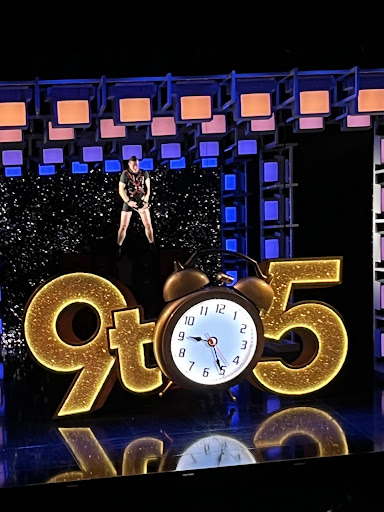 9 to 5 The Musical Produced by John Frost for Crossroads Live, Suzanne Jones and The Ambassador Theatre Group

Music and Lyrics by Dolly Parton

Despite having more cheese than a Dutchman’s cellar it is funny, poignant and entertaining with a fast pace and that unmistakeable Dolly bling.

Don your big shoulder pads, frizzy perm and stilettos and join the disrespected women at the 1980s office of Consolidated Industries to be part of the feminist revolution, Dolly style!

9 to 5 The Musical is an anachronistic feast bursting with double entendres and country witty asides encased in Barbie Doll glamour by the ultimate Barbie doll, Dolly Parton. With rhinestone-studded country music, it has more twang and slide guitar than you can shake a stick at and is a blend of Carry On movies and pantomime painted with a gilded Dolly palette. Despite having more cheese than a Dutchman’s cellar it is funny, poignant and entertaining with a fast pace and that unmistakeable Dolly bling.

The musical has been described as ‘a solid gold hit’ on the West End since 2008. Inspired by the hit 1980 film and book written by Patricia Resnick, with the simple premise of ambitious ‘sisters doing it for themselves. Doralee (Erin Clare: High Fidelity, American Psycho) Violet (Marina Prior: Cats, Fun Home) and Judy (Casey Donovan: Australian Idol Winner 2004, Streetsmart) are three very different but ambitious colleagues desperate to be heard whilst being undermined by their useless chauvinistic boss Franklin Hart Jnr (Eddie Perfect: Cath and Kim, Playschool).

Perfect is perfect for the role of the callous misogynistic boss who refuses to promote women and preys upon Doralee whose character mimics Dolly Parton, the ditzy sexy blond who is full of street smarts and is always packing. When the downtrodden frumpy Judy joins the office desperate after a bitter breakup with a bigoted husband, the women hatch a plan to reboot the miserable office politics, address the equality issue and boot out Hart.

Roz (Caroline O’Connor AM: Moulin Rouge, From Broadway to La Scala) is the mousy brown-nosed secretary and snitch who hilariously reveals a burning love for Hart, and lasciviously reveals a lot more than he is bargaining for! Meanwhile, the lonely Judy after exclaiming “I still miss Dick” (husband Richard), takes control of her life and the testosterone taunting trio kidnaps the heartless Hart when Doralee threatens him with a gun warning “I’m about to change you from a rooster to a hen with one shot!”

The empowered gals truss him up like a chicken (not yet a hen), hoisting him above the stage with his own S and M gear as he kicks and screams “I’m going nuts with my nuts in a truss!”

The production is slick and professional with split-second timing, seamless scene changes by the 19 strong cast and choreography to envy Buzby Barclay, devised by Lisa Stevens. Tom Roger’s set is ingenious incorporating old 1980s computers with an ever-changing multimedia backdrop reminiscing on the dot matrix printer office layout and the 9 to 5 logo cleverly incorporating Dolly within the alarm clock face.

The eight-strong orchestra buried in the pit reproduced all of Dolly’s witty country score skilfully and was a valuable addition to the smash hit show. Everyone was singing along to the hit smash 9 to 5 and clapped rhythmically to the scores country twang.

Dolly has gilded and vagazzled the whole production from storyline to sets and one-liners. Her sexy bolshy character Doralee is as subtle as a sledgehammer and Dolly cameos on stage through the multimedia alarm clock, introducing the characters and giving several renditions of her smash hit 9 to 5.

Her performance was a great touch adding to the country bling as she jokily opens and closes the interval and even ends the show in true Dolly fashion exclaiming “I howpe ya laaked iit, an if ya don’t keep ya mauth shuut!”

Even if the idea of visiting Dollywood has you heading screaming for the hills you cannot help but enjoy this unashamedly brassy yet slick production, full of brilliant one-liners and dated 80s social commentary in a world where trans rights are the new feminism.

There was a raucous standing ovation from an over-excited audience on the opening night with people blowing kisses and hopping up and down. Despite me laughing and cringing in equal measures I recommend everyone takes the opportunity to see this hicky cheesefest, after all, it is all about equality!