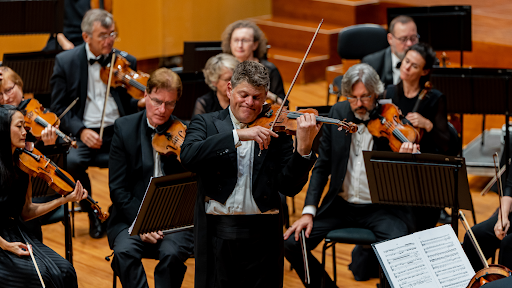 Beethoven and Dvorák presented by the Queensland Symphony Orchestra

BEETHOVEN Concerto in D for violin and orchestra, Op. 61

The concert kicked off with an exciting media presentation on a screen above the orchestra launching the QSO’s 2023 season, accompanied by local Cameron Patrick’s musically arousing Sounds Like Queensland. Musicians were filmed playing the piece in the short five-minute trailer roaming the stunning habitats of Queensland: with brass on the beach; strings in a stream bed; and even cymbals on the cliffs. The presentation culminated in a rousing finish with the full orchestra at the ABC rehearsal theatre and the catchy tagline Sounds Like Queensland. It was an exciting introduction to the concert and excellent marketing for more 2023 QSO subscribers.

Despite the large orchestra, the first half was monopolised by the incredible talent of Israeli maestro Guy Braunstein. Not only did he deliver a sublime rendition of Beethoven’s

Concerto in D for violin and orchestra as the violin soloist, but he also conducted the orchestra at the same time waving his bow as a baton whilst clutching his rare 1679 Roggieri violin in his left hand!

The imposing Braunstein was the youngest concertmaster of the Berliner Philharmoniker and has since travelled the World with his violin and releasing albums such as Tchaikovsky Treasures with the BBC Symphony Orchestra. Braunstein had been scheduled to return to the QSO in 2020 when the Covid-19 restrictions hit so it was a boon to finally have him return.

A tapping from the timpani launched Beethoven’s first movement the Allegro ma non-troppo with oboe and bassoon drawing Braunstein's bow from conducting to playing to produce a sublime sound as if it were a call from the sirens beckoning to the audience. The exquisite skill of the ‘fella with the fiddle’ had a creamy fluidity which oozed a unique texture and tone.

Braunstein’s conducting style was a continuation of his playing, as he whirled around to the QSO between solos his bow appeared to be playing the orchestra with long languorous strokes.

The precious violin seemed to have a life of its own during the cadenza when it leapt like a frolicking puppy and in the Rondo it taunted the strings egging them on to reply before giving a sly pluck.

The audience was the quietest I had ever witnessed, appearing to be spellbound by the performance and stamina of the maestro. It was rewarded with tumultuous applause as Braunstein graciously kissed the hand of Concertmaster Yatsuko Yoshimoto.

His vibrancy continued to mimic the broad bowing movements whilst conducting the four movements of Dvorák’s Symphony No. 8. The chocolate box assortment of styles were crammed into four movements all heavily influenced by Bohemian folk music. There was an unusual synergy between Braunstein and the QSO which was surprising on only their second performance together.

It was an uplifting and energetic performance by the QSO bursting with optimism. The incredible concert closed with a jubilant whirlwind of sound from the QSO and raucous applause. The gracious Braunstein smiled and stepped down from the podium to acknowledge the fabulous musicians of the QSO then mimicked playing an invisible fiddle before shrugging his shoulders and bowing to the audience. What a guy!

Fortunately, the concert was recorded for future airplay on ABC Classic FM.