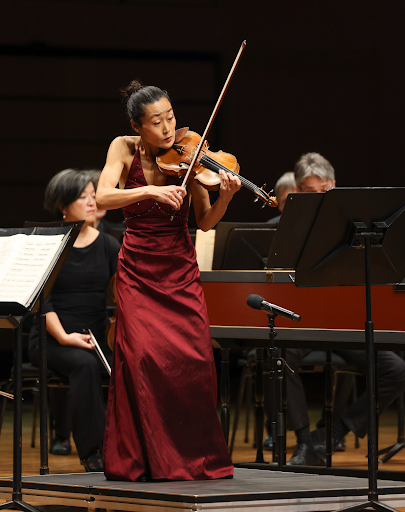 A unique concert that was fascinating to watch as well as hear!

Vivaldi’s The Four Seasons is an iconic classical journey through the temperate lands in an aural tone painting encompassing the changing balance of the four elements across the seasons. It is a favourite of many including myself and Concertmaster Natsuko Yoshimoto as it reminds us that we are all part of the cosmic cycle, as life is renewed from death.

In the 75th celebratory year of the QSO, there have been more ongoing challenges and tribulations in performing live music in Brisbane. The Four Seasons concert had to be rescheduled from March due to another flood caused by the deluge which closed the QPAC and the South Bank for several weeks, with some venues still closed due to flood damage including the QPAC car park. Fortunately, the Concert Hall is several stories up and out of harm's way allowing for the momentous concert to finally be experienced.

The unique concert featured not only Verdi’s traditional version of The Four Seasons but a reinterpreted tango from Buenos Aires by Ukrainian Leonid Desyatnikov based on the tangos of Astor Piazzolla.

It was the string's opportunity to shine without the rest of the orchestra after during the last QSO’s Mozart’s Requiem concert in Stravinsky’s Symphonies of Wind Instruments the need for the ubiquitous strings was omitted. Instead, the QSO focused on a reduced string section in a chamber orchestra setting with the harpsichord centre stage. They even removed the pesky conductor to maintain that intimate chamber orchestra feeling.

The program guide was most helpful in outlining the unusual program order alternating between each composer for direct comparison. It also included the rarely seen sonnets that accompany the work which gave an incredible insight into the work and the storyline that accompanies them.

Spring sprung into life opening the concert with blooming flowers and twittering birds in the Allegro until the storms gather. The third movement, another Allegro is the pastoral dance involving bagpipes and frolicking nymphs. The bows bounced with the joys of spring on the strings in spiccato style whilst soloist Yoshimoto reinterpreted Vivaldi’s phrasing with her distinctly unique pauses and accents.

Piazzolla’s Summer followed in a lively tango with smatterings from the phases of Winter. Desyatnikov had swapped the seasons around to reflect the seasons of the Southern Hemisphere in Buenos Aires which match our own. Which, for those who were not studying their programs diligently, seemed quite confusing. The snap of the two double basses accompanied discordant sliding strings to mimic the cracking of the ice underfoot as the strings danced their merry tango.

The Autumn of Piazzolla began with an unnerving squeaking like a cork being prised from a wine bottle as the double bases slid moodily between notes. A dark, almost James Bond theme ensued with a sultry tango and whirling violins.

The cello and violin solos stole the stage in each movement with Hyung Suk Bae and Yoshimoto forming a fabulous synergetic partnership throughout. Many unusual bowing techniques were employed to produce the tone of each movement with the snapping of the strings mimicking the gunshots in the hunt during the Allegro La caccia in Autumn, long Détaché strokes (long separate), double stops (several strings simultaneously), collé (pinched) along with spiccato bowing (bouncing). It was the largest collection of bowing techniques I have witnessed in a concert and it was fascinating to view as well as hear.

Piazzolla's Primavera Portena (Spring) closed the distinct concert with an image of sultry nights dancing the tango in the village square, punctuated by intermittent abrupt strings. As the lone harpsichord faded to silence into the night so did a fabulous interpretation of an old favourite.

Yoshimoto closed the concert exclaiming that she was warmed up now and that it was a lovely way to spend a weekend! She dedicated the uplifting encore of Melodic by Ukrainian Myroslav Skoryk to the people of the area and the trauma of the separation from loved ones in a poignant moving finale to an unusual and unique concert from the QSO.

The concert was recorded for future air play on ABC Classic FM radio.