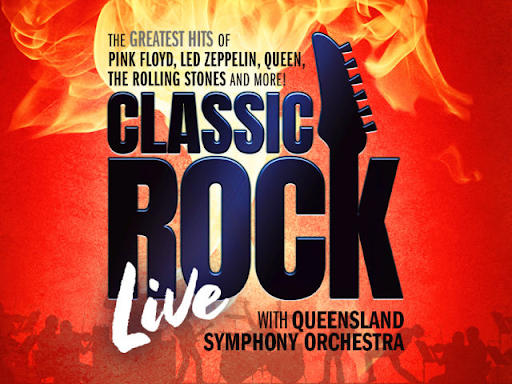 The promised explosive Classic Rock Live concert had been poised to electrify Brisbane in 2020 when the COVID-19 pandemic hit. Restrictions had the hottest rock tickets in Brisbane simmering in the background with ticket purchasers eagerly awaiting the rescheduled event. Finally, after 2 years the Classic Rock Live concert celebrating 24 of the most popular rock anthems hit the Brisbane Convention Centre Concert Hall, exploding like an H-bomb.

Not only was the audience able to hear hits from their favourite rock bands such as Queen, AC/DC and Led Zeppelin but there was a unique twist with the versatile Queensland Symphony Orchestra as part of the band. Orchestras have been used to create a fuller sound with intricate flourishes by prog-rock and pop bands after The Beatles’ seminal recording of A Day In The Life with 40 orchestral musicians (originally to have been 90!) way back in 1967. Most of he 24 rock anthems had not been produced with an orchestra, and were adapted by Jamie Messenger.

In total there were over fifty musicians on the stage including six high octane rock musicians with 2 guitars, bass, drums and 2 keyboard players, 5 vocalists and 2 backing vocalists plus 30-40 orchestral musicians. Peter Northcote was the Musical Director and is possibly the most recorded guitarist in Australian history and the winner of the 2007 Musicoz Best Instrumentalist Award.

Conductor Peter Morris, resident conductor of the Conservatorium Symphony Orchestra and Associate Professor of the Queensland Conservatorium Griffith University stood within the throng of performers on stage. The sound was incredible on stage when the concert blasted into the Brisbane audience with Paul McCartney’s explosive Live and Let Die theme from the 1973 James Bond film.

Brydon Stace belted out the iconic phrase amidst a blaze of lights and a barrage of instruments. The audience was instantly electrified by the versatile baritone who has performed with both the Sydney Chamber Choir and INXS. The dynamic vocalist Virginia Lilly who has also performed with INXS, Guns N’ Roses and KISS followed with a punked-up version of I Touch Myself from the Divinyls.

There was no let-up in momentum as Peter Milwood leapt onto the stage with Van Halen’s Jump in a Sid Vicious styled outfit, as the 80’s synth motif rang out from the two keyboard players.

The QSO had been somewhat drowned by the loud electronica but shone with Nights in White Satin, another iconic prog-rock song from 1967 by The Moody Blues, originally featuring Peter Knight conducting The London Festival Orchestra. The flute was divine floating over the packed auditorium with vocalist Ally Friendship perfectly complementing the orchestra. Deep Purple’s 1972 classic Smoke on the Water followed which had smashed into the charts with one of the best guitar riffs of all time. It was reproduced with aplomb by hard rock guitarist Joel McDonald on his Les Paul. McDonald is a technical genius and has performed with Guns N’ Roses, Judas Priest, AC/DC and Whitesnake amongst others.

When The Eagle’s Hotel California rang out the audience went crazy with both guitarists Luke Cuerden and McDonald salaciously strumming back to back at the front of the stage in true classic rock style. A slow sultry saxophone solo from the QSO changed the pace in Never tear us Apart by INXS.

The Guns N' Roses epic, Sweet Child O’ Mine had conductor Peter Morris bouncing up and down with the lick whilst the female vocalists belted out the chorus. The violins and the percussionist both got heavily involved to underpin the rock classic.

The incredible Kashmir by rock gods Led Zeppelin closed the first half and the audience could have gone home elated. Four vocalists filled the stage and the QSO’s brass shone punctuated by violins and guitars with a strong woodwind. The addition of the orchestra was epic filling out any gaps in the aural spectrum. Who would have guessed that you could improve on Kashmir!

The second half featured Zeppelin’s Stairway to Heaven with the incredible flute solo which had everyone on their feet cheering and whooping. Then the concert slowed the pace with a string of ballads including Tina Turner’s You’re Simply the Best which seemed to be favoured by the more mature ladies. They were so excited security kept ushering them back to their seats from the aisles where they were bopping and punching the air and fortunately not the security guard!

A brilliant trifecta of rock legends closed the incredible concert with Bon Jovi’s Living on a Prayer with lovely cello and double bass, Pink Floyd’s Comfortably Numb with a terrific trumpet solo and Queen’s Bohemian Rhapsody as an encore. Perhaps in honour of the Queen’s Platinum Jubilee celebrations?

The six-minute iconic mini glam-rock opera is the band’s defining song and was so original it blew everyone away. It is the song that broke all the rules and went on to break records including being the third biggest selling song ever in the UK. Queen never fully performed Bohemian Rhapsody live due to the excessive overdubbing required in the finale.

However, Brydon Stace did a superb Freddie Mercury and the QSO were going at it hammer and tongs to recreate an amazing reproduction of Queen themselves. Everyone was on their feet as the audience helped sing the chorus. The standing ovation with whoops and cheers felt just like a real rock concert, although the ladies that had danced into the mosh pit were a little older than the usual crowd. No one wanted to leave and without a second encore the musicians left with the audience clamouring and chanting for more like at all good rock concerts. Let’s hope there will be another Classic Rock Live concert without waiting another two years!