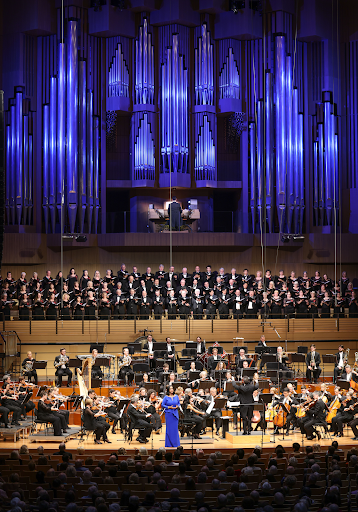 A spectacular concert of highlights!

The night was charged with the anticipation of opera fans, young and old in the foyer of the QPAC. Many were suitably attired in dicky bows and formal gowns, although there were some rebels in civvies like myself. The Queensland Symphony Orchestra’s Opera Gala is the perfect concert both for opera aficionados and also for the less operatically acquainted, as a brilliant introduction to opera with the boring bits removed!

The program highlighted the best of the “big four” in opera with excerpts from Verdi, Puccini, Bizet and Rossini. Excerpts from the most popular iconic operas were included with Verdi’s Triumphal March and the lesser-known Tomb Scene from Aida, the beautiful Love Duet and the unusual Humming Chorus from Puccini’s Madama Butterfly. Bizet’s duet from The Pearl Fishers and two stunning excerpts from Carmen with the Toreador Song and Habanera were amongst the 15 excerpts.

Rossini’s popular rousing Overture to William Tell was a familiar highlight and two rare pieces Hymn to the Sun and Easter Hymn by Pietro Mascagni bookended the concert, both rousing Australian premieres with pizazz.

Mia Stanton earned her stripes when she enthusiastically opened the evening for her first concert as a fully-fledged 1st violin for the QSO. Her announcement was greeted with fervent applause, as can always be expected from the supportive QSO audience.

We experienced a dramatic sunrise in Mascagni’s Hymn to the Sun. Dawn opened the concert dramatically from the inky blackness as Phoebe Russell’s dark double bass resonated across the concert hall. The instruments gradually joined her with the tentative light, until the brass serenaded the sun and the massive Brisbane Chorale greeted the majestic dawn with fervour.

A fabulous concert ensued with the crystalline voices of the four soloists soaring across the audience. The eighty-five-strong Brisbane Chorale, directed by Musical Director Emily Cox AM, had the concert hall ringing with the hum of the unusual Humming Chorus from Puccini’s Madama Butterfly.

Mexican tenor Diego Torre and Armenian-Australian soprano Natalie Aroyan had a touching moment clinging to one another in the beautiful Love Duet whilst Conductor Dane Lam was balletic on the podium swooping and diving with large expressive circling arms.

Bizet’s Au fond du temple saint duet from The Pearl Fishers between Torre and the Argentine-Australian baritone José Carbó was sublime, and my highlight of the evening.

Verdi’s Sanctus and the Triumphal March were incredible with the sheer volume of sound produced from around 150 performers! You could almost hear the elephants from Aida trumpeting and marching, such were the reverberations. Lam was leaping up and down clearing a foot or so in height as he vigorously conducted.

A deliberate change of pace slowed had the tragic love triangle between Aroyan and Torre trapped in the tomb whilst one of Australia’s most successful artists, Mezzo-soprano Deborah Humble, as the princess lamenting her loss.

Offenbach’s iconic Belle Nuit (Barcarolle) from The Tales of Hoffman was superb, with Humble and Aryon accompanied by a whirling cello and flirtatious flute and harp and another highlight in a concert of highlights.

Bizet’s two Carmen excerpts were also brilliant. With a stunning Habanera solo from Humble, who admitted her first opera appearance in Brisbane with Carmen had been eighteen years ago in 2004. Baritone Carbo had a robust and full tone like a well-aged whisky, as he pompously strutted with the male members of the Brisbane Chorale in Toreador.

At the concert’s conclusion, the audience welcomed the performers with almost unending applause spurning a moving encore from the four soloists with Verdi’s Bella figlia dell'amore from Rigoletto.

In a celebration of the QSO’s 75th year, it was fitting that this was the most spectacular and enjoyable of their Opera Gala concerts, with a fiesta of intermezzo’s, duets and a dramatic chorus!

Thankfully, you can relive the concert on ABC Classic on June 25th at 1pm (AEDT).