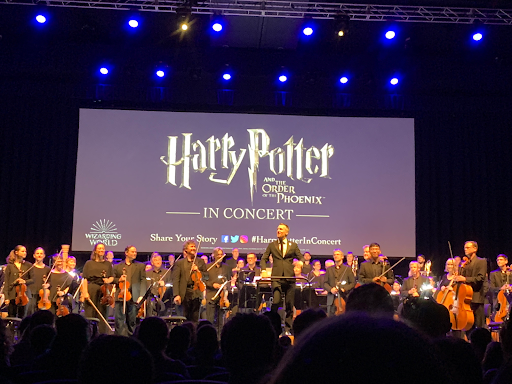 A magical concert for muggles, magicians and music lovers alike with a fantastical flawless presentation by Conductor Nicholas Buc and the QSO

Wand waving wizards and witches with a smattering of muggles piled into The ‘Great Hall’ of the Brisbane Convention Centre on Saturday to witness the Cineconcerts presentation of Harry Potter and The Order of the Phoenix with the Queensland Symphony Orchestra enchanting the audience with their skills.

Whilst Brisbane was recovering from yet another “once in a hundred flood event,” the QSO gathered to provide some much-needed light relief to an already traumatic 2022. Conductor Nicholas Buc introduced the concert with a brilliant impression of the despicable dark disciplinarian Dolores Umbridge. Her creepy motif, composed by Nicholas Hooper alludes to the darkness of the fifth film punctuated by a jaunty jig that accompanied the jokes and japes of the Weasley twins.

The unique screening of the 2007 film was to witness the live symphonic orchestra seated below the high-definition 12-metre screen playing the background music for the entire film, lending a deeper dimension to the film. The entire two hours and twenty-minute score of Nicholas Hooper along with the magical Hedwig’s theme from John Williams was performed by a full orchestra of over fifty QSO musicians along with the original dialogue with screened subtitles lest the orchestra became too boisterous.

I was sitting close to the orchestra and was fascinated to see the screen that the Conductor Nicholas Buc used to coordinate the live QSO performance with precision timing. Green bars denoted the upcoming start of each piece with grey bars scrolling along for each musical bar and a red bar for the end of each piece. A white flash appeared to indicate that the next piece was imminent enabling Buc to prepare the orchestra with raised arms, lest they got too interested in the film plot! Amusingly, most of the musicians watched along with the film during each brief interlude and appeared to be fans, probably Gryffindors.

The audience was mesmerised watching both the orchestra and the film simultaneously. Sinister minor keys signified the darkening gloom of the fifth of the eight-film series, as Lord Voldemort quietly returns to cause chaos and conspiracies at Hogwarts.

The audience was encouraged to participate, cheering during The Fireworks movement and booing at the Professor Umbridge one. The QSO was often applauded after each of the eighteen movements, especially when the orchestra was particularly vibrant. The audience had a good mix of mature Potter fans and families with younger children, creating a whole new generation of Harry Potter fans and potential future orchestral musicians.

It was a magical concert for muggles, magicians and music lovers alike with a fantastical flawless presentation by Buc and the QSO. Cineconcerts and the QSO will be returning in 2023 with one of the best films of the Harry Potter series, Harry Potter and the Half-Blood Prince, so book early for the next intake at Hogwarts next year!