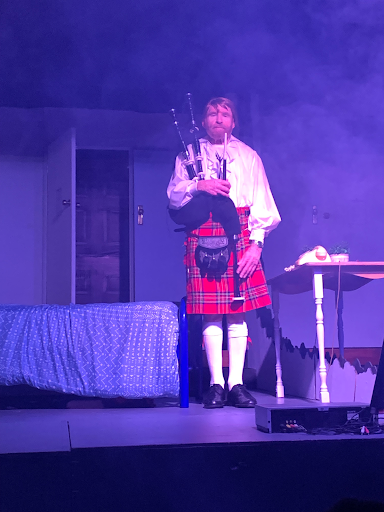 The funniest farce I have seen with a Scottish accent to make any haggis eater cringe!

Farces are an acquired taste and being British myself I have been exposed to a plethora of them, including the infamous Run For Your Wife. If you haven’t witnessed a farce before, it is like an adult’s pantomime full of rude double entendres and a set with numerous doors to create the ‘he’s behind you’ moments.

The bumbling Mayor of Canberra played by Gary Kilger is under suspicion of cooking the books and requests a salubrious meeting in a motel room with his new sexy accountant (Alizah Pomery). Cue the two Laurel and Hardy-styled cops (Rob Connaughton and Leila Bishop) who wait in the room next door to record an admission of guilt on tape while the alluring accountant flirts with Mayor Meekly. With such a simple premise what could go wrong?

Cue ‘Big Mac’ (Laurie Webb) the ginger Highland hit man who is hilarious with his rogue brogue accent and killer bagpipes. Crooked Agent Frank (Nick Cockcroft) checks in to protect the Mayor, whilst his wife (Sarah Britton) is frantically searching for him wherever he isn’t. Meanwhile the accountant, Karen Brown removes her clothes for all and sundry and it is all caught on camera.

So how do seven characters mislay each other amongst two motel rooms? Introduce eight doors into the mix with some witty one-liners and lots of changes of clothes and you have Unnecessary Farce. The single scene set was cleverly designed by William McCreery Rye and constructed by the Indooroopilly Men’s Shed to allow you to easily witness the witty shenanigans as doors slam and beds are filled with characters in compromising positions.

With Scottish music playing in the newly renovated foyer and Tartan clad volunteers serving cheap wine, coffee and snacks it was great value for money and a fun-filled night of escapism.

Paul Slade Smith’s Unnecessary Farce has all the components of a romping good farce plus a special something from the Centenary Theatre Group to make it the funniest farce I have seen. It is replete with sexual frissons, misunderstandings, clever puns and a Scottish accent to make any haggis eater cringe and don’t miss the brilliantly scripted last line…