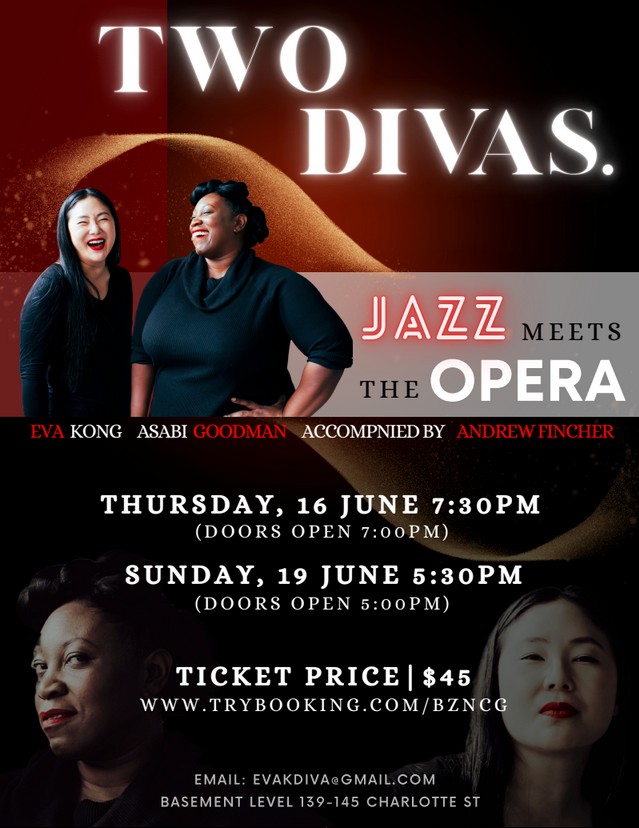 Two Divas is a musical fusion performance of jazz and opera, held in an underground basement known as The City Workshop, that features soprano Eva Kong and jazz performer Asabi Goodman accompanied by Andrew Fincher. Two Divas is a solid concept and the rivalry between these two talented vocalists only adds to the entertainment factor of the show.

Kong unabashedly owned her “diva” title as she pushed Fincher from his stool to sing her heart out to a song in Korean. Goodman also stole the scene with her rendition of Feeling Good by Nina Simone and A Natural Woman by Carole King and called out a fellow American in the room going on to say “17% of the American population speaks a foreign language”. It was a night filled with laughs, wine and good music.

Two Divas was made all the better with the banter between the two vocalists as they would compete with one another in their preferred genre and then challenge each other to step outside of their comfort zone. Learning more about each of the divas on a personal level and their respective backgrounds made for an intimate experience of the performance. The battle continued with “Diva’s Choice” and Kong and Goodman got to step back into their element for a final showdown.

Two Divas was a brilliant performance with an A-grade concept, and I am unsure if I will ever witness anything quite like it again. Each of these performers brought a unique element to the table, whether that be Goodman with a theatrical element to her tone or Kong’s powerful voice which ricocheted off the concrete walls. I wish both of these ladies best of luck on their future endeavors and know that even though they will see bigger stages in their lifetime, they created a truly special work in this underground chamber.