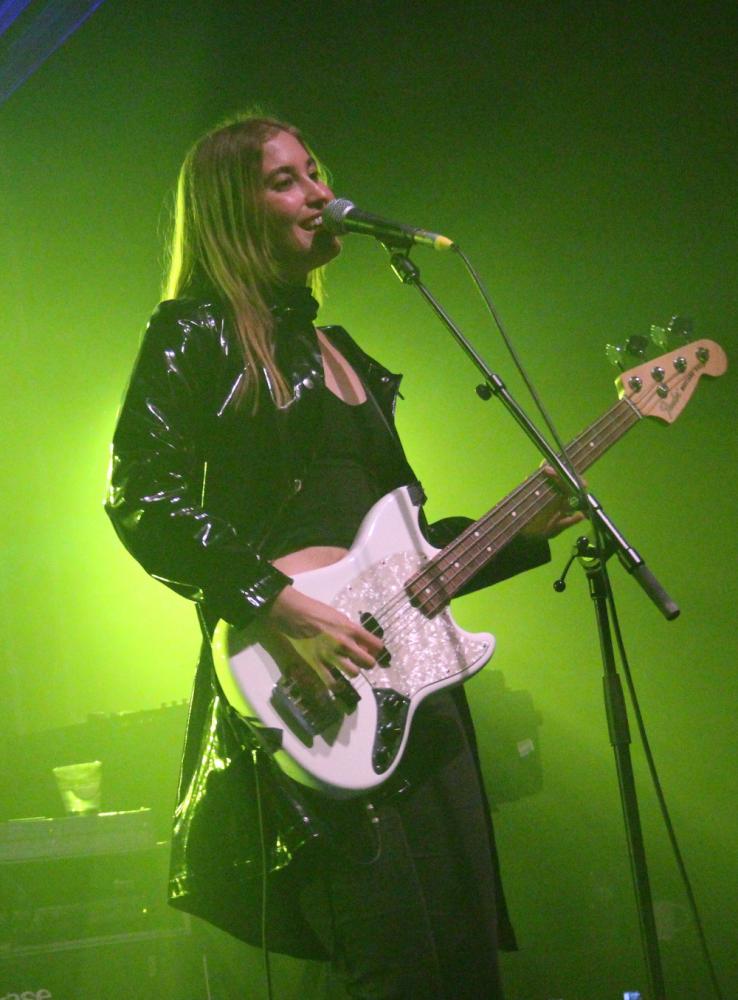 - Hatchie’s homecoming show at The Triffid was a buoyant celebration of her sophomore album Giving The World Away, released earlier this year, via Secretly Canadian and Ivy League records. Inside the packed-out venue, there was a cheerful and warm atmosphere. This Brisbane/Meanjin crowd are like proud parents, rejoicing in the well-deserved success of their own rising dream pop star.

After multiple national and international tours, Hatchie (Harriet Pilbeam) is now a seasoned front person. She doesn’t dance around. She doesn’t speak a whole lot to the audience in between songs, but as she sings, she commands the crowd’s attention with an unwavering, self-assured gaze and stance, that is bewitching.

Tonight, Hatchie is joined on stage by L.A. based singer/songwriter Samira Winter who was also the opening act, slinging her own charming brand of '90's dream pop. As the band walks on stage, a delighted cheer erupts in the room that immediately turns into hushed excited whispers as the members pick up their instruments. The dreamy light scape casts lime green and pastel blue hues over the performers, creating an ethereal effect upon the stage as the band effortlessly delivers their highly polished swooning sound. On keys and lead guitar, Joe Agius nonchalantly sends out the shimmering hook laden melodies of each song, while Harriet and Samira’s vocal harmonies are flawless, beguiling the crowd in a way that only the best shoegaze bands can.

The band opens with Don’t Leave Me In The Rain, my personal favourite. When Hatchie sheds her bass guitar in favour of a tambourine, to launch into popular single This Enchanted, the crowd goes wild. It’s a varied set, with a few oldies thrown in, including songs like the hugely popular Obsessed from Hatchie’s debut album Keepsake, as well as a cover of Jennifer Paige's 1998 teen-pop anthem Crush. But it’s the newies from Giving The World Away, including the title track that really gets the crowd going. During Quicksand, and The Rhythm, everyone is ecstatic, arms slung around each other’s shoulders as they sing along word for word. We are all having a great time, and the band seems to feed off this energy, Samira and Joe beaming out at the audience, and even Hatchie gives a small smile as the crowd become her back up choir.

All too soon, Hatchie announces the last song. She thanks us for coming along, then warns us that they don’t do encores, so “soak it up”. This news is met with a collective light-hearted groan, but the crowd cheers up again when Hatchie is joined on stage by surprise guest, Tim Nelson from Cub Sport, to play the album’s opening track and popular single Lights on. It’s a satisfying end to a stunning show. I come away from this gig, with a huge grin on my face, and I’ve been playing the album on repeat since Saturday. Hatchie is a truly great export from this city, and I can’t wait to see what she brings us next.