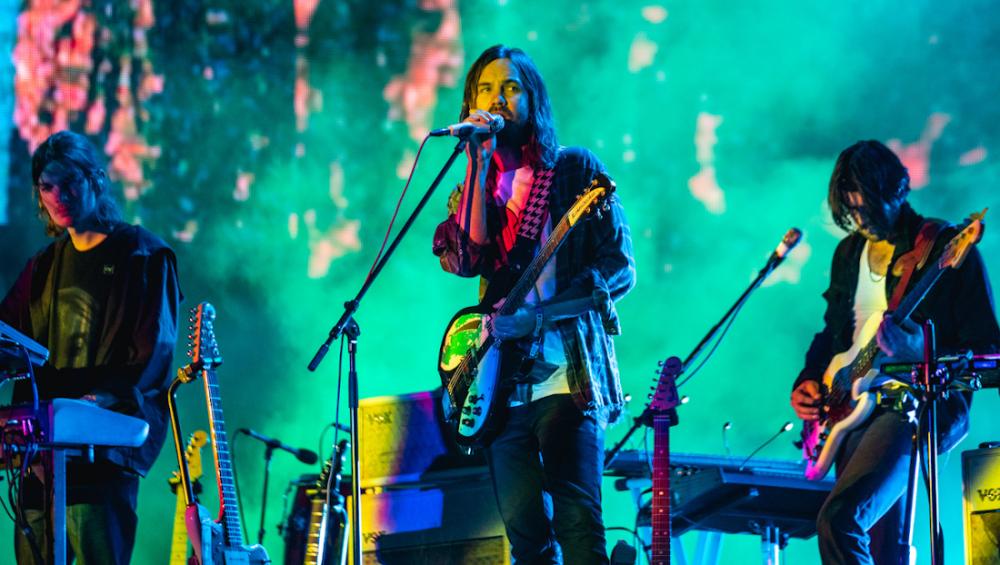 - In this new world of connection within music culture, we are able to see behind the curated curtain quite easily, at least for most bands. Instagram and other platforms offering a chance for snapshots of artists days and photos over the years of their career tracking the level of success often in line with the crowd numbers and production quality of their live shows. It’s important in a world moving so fast with these updates to take stock of the process, and as it turns out seeing Tame Impala at the Brisbane Entertainment Center on a Tuesday night offers this exact moment of inner peace and lucidity.

Local pop act Sycco are a band at the start of the same journey Tame Impala have been on for many years. Building their base with giant support slots for Glass Animals and tours in Europe, their string of QMA awards speak for themselves. Playing to a hometown crowd at the very early slot of 7pm, it’s evident many people have yet to filter in to the venue. Not that this worries the giddy four piece, literally buzzing as they step onto the mysterious blanketed stage, looking like an alien spaceship of lighting equipment and instruments. Whilst Sycco only have a debut EP and a string of singles out, their sound has morphed dramatically over the releases. Early cuts like Peacemaker and Nicotine focus on disguised disco rhythms to get the crowd swaying whilst the guitar drops down in the mix as a rhythmic flavour on tracks such as My Ways. Their indie radio hit Dribble is always a crowd favourite but it’s exciting to see crowds getting around deeper cuts on such a huge stage. I’m always impressed by how Sycco manage to weave airy guitar lines into their pop sensibilities but cannot wait to hear where they take their sound next after a giant collaboration with heavy hitter Flume. Just as Kevin Parkers ascent to comfort on stage has seen him dip his toes into the pop star crowd participation enabled by his synth-heavy hits, singer Sasha McLeod’s departure from behind their guitar on recent tracks with Flume and Chrome Sparks has given them a chance to try their luck controlling the crowd. Sycco have been one to watch for years now, but with their stages continuing to grow and confidence in tow, we are in for a huge transition for the bands sound and stage show with their upcoming releases. A slice of what being at the top of your game early in your career looks like – the stars are aligned.

Whilst Sycco are still fresh-faced in their career, Genesis Owusu sits in his own lane as a rising pop star at the top of the scene with impeccable creative direction and songwriting backed by an all-star team of songwriters. Coming out of Canberra to the big smoke in Sydney, Genesis usually travels with his all-star band in tow playing festival slots across the country and selling out huge venues on his own accord. Tonight, he is suited up in a custom red piece with edges and angles that accentuate his gyrating sways throughout his back catalogue with backup dancers in tow. Perhaps we are in for a pop star moment from Genesis in the future as his catalogue continues to grow and the hype hasn’t slowed since his chart-topping album Smiling with No Teeth dropped in 2021. His recent singles have given him a chance to solidify the vibe change musically and stylistically from indie radio stalwart to pop superstar but a pop star doing it their own way, akin to Prince in terms of the attention to musical prowess. Punk energy mixed with instrumentation that wouldn’t feel out of place in a church service permeates his recent single GTFO. The chorus bringing a raucous singalong from the almost full Boondall crowd, only accentuated by reactions to an incredible physical display by Genesis channelling the power of Neo dodging bullets to float amongst his dancers in time with the chorus, evoking imagery of something straight of the pages of a religious text. Heavy hitter singles Don’t Need You and Gold Chains end his stadium show, with the energy immediately turning from cathartic display to trying to tear the stadium apart. It’s impossible not to get out of your seat in the bleachers to these, especially when his previously sombre and artistic dancers cast off their masks to control the energy explosion for two of the biggest hits of 2021. Genesis already has the culture in a frenzy from his recent album and his new singles channel that energy into somewhere different

The come up for Tame Impala has not been overnight, whilst their breakthrough 2015 pop release Currents was a global success that benefitted from social media memes and just generally being a front to back psych pop masterpiece, this was deep into their career. However, as many YouTube rabbit holes will demonstrate, the trajectory of Tame Impala has been steady from their roots in Perth to headlining stadiums across the world off the back of their latest release The Slow Rush. Their rise has been well-documented and authentic, beginning with their fuzzy EPs and debut album Innerspeaker which recently celebrated its ten-year anniversary, as has their second album Lonerism this year. With so many anniversaries and reflections on how their sound has changed, it’s no surprise their live show has morphed into a greatest hits show but with a twist. It’s evident there has been extensive research into how best to suit the visuals of Tame Impalas music with the target audience of psychedelic appreciators (take that whatever way you choose). Opening with a slightly uncomfortable polished video of a pharmacist spruiking their fictional drug Rushium and its potential effects with the following show, what begins as a sanitised piece to camera slowly morphs into a distorted Jeremy Shaw art piece. As the visuals warp within themselves, the almost sold-out stadium crowd erupts as our unified trip begins. As the smoke beings to envelope the stage and the giant ring of light above the stage reveals itself, Parker and Co take the stage to The Slow Rush opener One More Year accompanied by visuals of a rising blood moon in an oh so lovely crossover with any Pink Floyd tribute show at a planetariums, huge beams of light erupt from the stage. Never before have I seen the Boondall stage so occupied with lighting and visuals despite never being overwhelming. A huge half circle of rows of lights behind the band shine throughout the stadium and a giant screen wraps around them yet never all at once. As the dance between instrumental proficiency and lighting prowess continues, we dip into the visuals of Windows Media Player for Borderline as the bongos take over the mix and visuals of Kevin Parker mouthing each song are filtered through a kitschy 00s fire filter. The fine line between nostalgia bait and pure psychedelic brilliance is channelled for each song in a brilliantly unique way. During Lost in Yesterday a computer-generated world that feels like a psychedelic version of Donkey Kong Country moves us forward through perfectly placed doors in a variety of ancient and space age worlds alike, in time with the music before going through a rabbit hole into what is seemingly a wormhole. Meanwhile on the extended jam of Breathe Deeper the jam takes a page out of Daft Punks world, utilising the same funky angular modular synth sounds found on their Alive 2007 tour matched up with a sea of floating lasers above the band and shapes thrown that seem akin to a night sky full of Tetris blocks. Visuals such as this permeate each track, with each song throughout the almost two-hour set being accompanied by not only it’s own curated lighting show but also visuals that are so well suited to the music without ever using the same visuals twice.

Whilst other iterations of the Tame Impala live experience have felt very festival oriented and pushed visuals to their extremes without any link to the music, this show is completely refined and has a natural progression in how extreme the lighting and visuals become throughout the show. For instance, the hectic robot visuals during Elephant in previous live shows has been changed to now see a pulsing sway of lasers that marks the transition from songs being backed by videos and lighting to a deeper level of crazy visuals marked by lasers across the stadium and the extreme lighting that forced Tame Impala to release a seizure warning before the tour. As synth heavy songs and guitar heavy songs interweave throughout the setlist, the visuals completely change. Early Tame Impala songs were always associated with the sound of the Beatles, with Mind Mischief providing us with an experience 50 years after the Beatles that leaves us no longer wondering what would have happened if George Harrison bought a fuzz and delay pedal in the 80s. To describe every song in detail, we would be here all day as each song truly utilises so many lighting and visuals effects between verse and chorus and never hits the same effect twice. Cuts from debut album Inner Speaker seem to fall quite flat on the crowd, but they serve as a great palate cleanser regardless with a synth-pop heavy set broken up by some pleasing phased out jams on Runway Houses City Clouds. All we know is we didn’t get to hear Half Full Glass of Wine but we can live with that. Set closer One More Hour is also a bit of a let down being one of the underwhelming cuts on The Slow Rush but I’m assured this is now a Tik Tok meme, or at least is until that lamp runs dry, and thus everyone but me probably love it. You can’t win ‘em all.

The Tame Impala live show has become a machine so finely tuned that it not only pays homage perfectly to some of the greatest live shows throughout history but carves its own name into the rock of stadium production for a new generation. In much the same way people were spruiking the Dark Side of the Moon live show for years to come, this iteration of Tame Impala with three encores that build energy higher each time is a show that will be talked about by attendees for many years to come. Even better is the curation of opening acts, with the show providing a true spectrum of where Australian pop is in 2022 with the early career superstars Sycco providing a window into the future of pop that has flipped the sound of the past ten years on its head (while being heavily influenced by Tame Impala). Right up there with a man in his own lane, Genesis Owusu, bridging the gap between genres while adding in a level of artistry in his image that will only continue to grow and see him surely headlining Tame Impala sized stages in years to come.